Man, last week was so weird. Why was last so weird? I don’t even know. Hope you all had a less weird week than I did!

To escape the weirdness of my week, last night I took myself out to see Safety Not Guaranteed. And it’s so good!!! I mean, it’s a time travel movie so by that alone it gets extra awesome points.

Check out the website to find where it’s playing. It opened in NYC, LA, Seattle, and Portland this past weekend and will be in more cities soon. Safety Not Guaranteed

For some reason, Patsy Cline has made me feel much better about the weirdness that’s been my life recently. I don’t know why exactly. Except that it’s Patsy Cline? And she’s wonderful?

And hey! Check it out! We have a Bonaparte House Film update! Recently Mike and I put together this little video for our friends Transmit Info, Inc. We’re really excited to post it and share it with all of you! Check out the video, visit TransmitInfo.org, and don’t forget to like BHF on the Facebook!

And that’s it for me this Monday. Love you guys. As always. 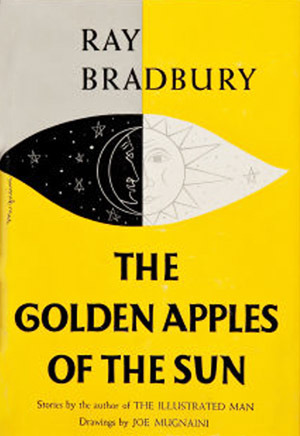 I’ve been going back and forth all morning over whether or not I wanted to write something about Ray Bradbury. He’s not the first writer I’ve loved to pass away and the news this morning felt more like a melancholy whisper than a shocking punch to the gut. But it’s made me sad in this profound sort of way that happens when you realize something magical is now gone from the world.

I never did meet him, and I’m honestly pretty sure I would have failed at talking if I had, but I was lucky enough to see him twice in person. The first was that time in 2009 when I saw him speak at UCLA. He had things to say about his life, his career, his current theater projects, but mostly what I took away from that afternoon was the advice to Do What You Love.

The second time I saw him was actually that same year, several months later, at Comic Con. As I was wandering the floor, lost in awe amid the comics and storm troopers, I momentarily stopped paying attention to where it was exactly that I was walking. I’m sure I was distracted by something shiny. Until I realized that I was about to walk into a man in a wheelchair. Moments later I realized that man was Ray Bradbury. So literally, I almost stepped on him. I stared dumbfounded for a few moments and then, dismayed by the growing, gawking crowd, I sheepishly slunk away.

Bradbury is just one of many authors I loved as a kid. C.S.Lewis, Madeleine L’Engle, Maurice Sendak, Lewis Caroll, they were all my introductions to the fantastic and frightening. They all open worlds, introduced ideas, and are each responsible for my continued love of science fiction, fantasy, and horror. But it was Bradbury’s writing that made me want to be more than just a reader, just a fan. His stories cracked something open in my brain. I don’t think I can fairly give any one person credit (or blame, whichever) for making me want to write. I don’t honestly even remember when I first decided I wanted to be a writer. But Ray Bradbury did more than just make me want to write, something in his work made me believe that I could. His stories not only took me places, they made me want to explore those places on my own. I wanted to leave the tantalizing glimpses he offered and ramble off on my own adventures. He also taught me that fiction can be so much more than just a story, you can touch humanity through these words.

After Bradbury I moved on to more science fiction with Heinlein, Clarke, Asimov, Dick, a ton of others. So he wasn’t necessarily my first in the fantastic and he certainly isn’t my last. He’s my middle. And his stories are my enduring loves that I return to again and again and again.

I don’t really know what more to say other than I’m sad to hear he’s gone. He gave so much. Stories, ideas, memories, laughter, inspiration, and a pure joy for life. I’m sure many are missing him.

Goodbye, Ray Bradbury. And Thank You.

His obituary in the Los Angeles Times.

I did waaaaaaaaaaay better in May than April or March. But yes, I saw the Avengers twice. And went back for a second viewing of Cabin in the Woods. I guess it was a month of Whedon?

I really enjoyed The Avengers (although to be honest the only reason I saw it twice was that I didn’t actually have to pay for the first time…). It’s fun, I enjoy the characters, but you all probably know that by now.

Early in the month I watched Tribeca film Sleepless Night for a guest appearance on Wrong Opinions About Movies. Give it a listen if you haven’t already. Matthew and I both really enjoyed it I think. Although if you listen to the most recent episode of WOAM you’ll see that Matthew is no longer correct about things when he decides to not like Phantasm. Geez. How am I supposed to recommend movies to him now? I haven’t written about Phantasm in a while myself but my dear friend Katie had a rather different reaction when she watched it for me in October.

More recently I’ve apparently been watching a lot of movies in French. Man Bites Dog which is just F’d up. Also FINALLY watched Cleo From 5 to 7 in honor of Agnes Vardas’s birthday. I really like Agnes Varda and I enjoyed Cleo. French Films! Fun.

And then I finally discovered Whit Stillman and my life is just happier for it. Watched Metropolitan on Netflix and then Damsels in Distress over at Cinefamily last Friday. Damsels is technically a June movie but whatever. It made me smile a lot. It’s really fun and it ends with a new Dance Craze. There’s so much to love. They still have a couple of shows happening this week so check it out if you’re in LA!

Anyway, here are my May movies. Still behind but slowly improving. Total count for the year is now at 84.

OK, people are asking so I’ll give you the April update. April really was even more insane than March. I managed to watch like five movies. For serious.

But hey, good things are happening. Had a birthday, went to Coachella, wore gold pants (Not lying! That happened!), worked a lot on screenplay stuff…

Now I’m back, a couple of deadlines for things have passed, and life is sort of getting back to normal. Whatever normal means at this point. Maybe May will be better for the movie watching. I dunno. I still have a couple of more deadlines to get through so we’ll see.

Anyway, here they are. My April movies:

Highlights were Comic Con, Cabin in the Woods, and Here. I loved them so hard. You should see those three. For serious.

Can I go back to bed now?

I know, I am such a slacker! It’s so not even close to being March anymore!

Anyway, here’s the movies I got through in March. Still a pretty short list but there was that whole part of the month where I was running around the desert shooting my own thing. And making this happen: http://www.bonapartehousefilms.com/

So ya know. Not as much time for the watching. April promises to be just as insane so I don’t know. Maybe I’ll get through 200 movies this year? If I’m lucky. But hell, that’s still kind of a lot of movies so whatever. I will watch what I can! So far the count is at 55. If you’re keeping track. Like I guess I am?

I liked The Hunger Games? Didn’t love. But I really enjoyed seeing the world come to life and I thought the movie is fun for what it is. You might hate it or you might love it but if you like the book it’s worth giving a chance.

Oh but hey! I also saw Morgan Spurlock’s Comic Con doc last night and it’s wonderful! I might even write about that later. Either way, it opens today and you can either see it in the theater (Do it!) OR if it’s not playing near you, you can rent it On Demand and through itunes and all that. So no excuses! Look for my name in the credits! But really, it’s a lot of fun. I highly recommend it.

Oh. Well then. I guess this is me posting about it. Oh whatever. Watch the movie. Here’s the website: http://comicconmovie.com/

Back From the Desert

I would write things about how amazing the location ending up being or how much fun the weekend was. But mostly I’m just a little too brain dead to be doing these writing things.

I did manage to post a few pics that I grabbed on my phone over the weekend. You can see them over on our FB page:

We’ll have some more for you soon.

I’m very excited about how things went, even if I am completely sun & wind burned. My lips are really, really chapped. In case you were wondering. I’m also really glad that everyone put up with my complete last minute change of mind on, well, almost the entire script. Um. Oops. I just saw that location and had to take advantage of it! It would have been silly to not have done.

OK, I’m gonna continue staring blankly at my screen in a near comatose state not. Enjoy the pics. More to come. 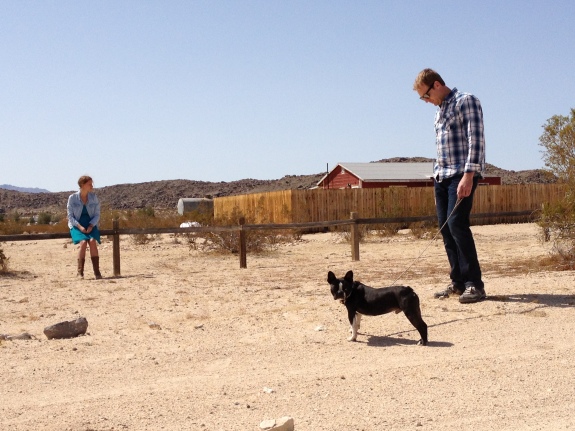 Out on the ranch - photo by Michael Kang

Also watched Woody Allen in The Front but there doesn’t seem to be a trailer for that one around. Go figure.

Anyway, back to work now.

Over the last few months I’ve been working with several wonderful people in making magical film things happen. And now, just in time for our second short film shoot, I’d like to introduce you all to Bonaparte House Films. We have a website and everything!

Along with Gina, Mike, and Rachael, over the next, well, the foreseeable future, stay tuned for project updates, videos, collaborations, and all kinds of fun things. I’ll still be posting here but come visit our website:

Check out behind the scenes of our productions. Join us for all of the fun things we do. It’s going to be very, very exciting. I promise!

And this weekend Rachael, Mike, and I will be heading out with a small and awesome crew to Joshua Tree. We’ll be shooting our second short film “Dust Bunnies” and if you follow us on Twitter there will be at least one update. I mean, it’s Joshua Tree and the cell reception is a little sketchy so there may only be one update. But I’ll share the pictures when we’re back.

For now follow us and keep in touch. We’re off on an adventure.

I love Robert Altman. And also watching strange movies that break my brain.

Happy St. Patrick’s Day! Is it time for beer? 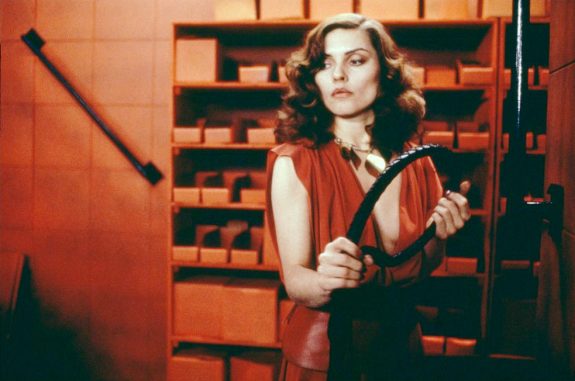 In honor of David Cronenberg’s birthday (and the Ides of March?), yesterday I revisited the sublimely weird Videodrome. I wrote a bit about Cronenberg back in October when I watched The Fly (also sublimely weird).

Videodrome is classic Cronenberg. Horror, sex, violence, crazy effects, creepy technology. Debbie Harry into S&M. Leaves you with the urge to get all psychoanalytical. Ya know, fun times.

Film Chatter
Create a free website or blog at WordPress.com.